The Lincoln assassination is one of my pet topics.  It’s so endlessly interesting—there are so many fascinating ideas and characters involved, and it’s easy to pull a thread and end up disappearing down a rabbit hole of vague connections.  And then the next thing you know, you’re at the Library of Congress transcribing Adam Badeau’s love letters.

There’s just a whole fascinating world of people involved, and I think the second half of the 19th century is particularly entrancing.  In some ways, that world seems completely alien to us, but there are just enough links to today to make it seem surreally grounded.  And the depiction of 19th century Washington is like that, too.  That block of 10th Street, especially—okay, I’ve walked down that street many times, I’ve wandered through Ford’s, and seen plays there, peered up at the presidential box, and moped around the Petersen House.  It’s DC enough that you could walk down this block many times and it will all blend in or seem not too different from the surrounding streets, but if you really look it’s so, so easy to imagine what took place their the night of April 14, 1865, the crowds in the streets, the shock.

I think there are a lot of popular misconceptions about the Lincoln assassination.  Some of these are disappearing due to the recent spate of assassination-related media over the past few years, but I think many remain.  People seem not to know about John Wilkes’ family, or that it wasn’t an isolated assassination but part of a conspiracy, or about Henry and Clara, or that John Wilkes was on the run for nearly two weeks afterwards.  But I think it becomes more and more vibrant the more you look for the truth beyond the general misperceptions.  Now, I’m not saying this to be all “nyah nyah I’ve read the books and you haven’t,” but just to say that I think it’s fascinating how this event has sort of taken on a life of its own in the popular imagination.  Go to Ford’s Theatre or the house where Lincoln died and listen to people talking: you’ll hear many different versions of history.

One of the more obscure bits of history—Lincoln’s dream about being on a ship—seems to be becoming a well-known piece of the story these days.  It appears both here and (prominently) in Lincoln.

So, Killing Lincoln, then.  In truth, it was much better than I expected.  Billy Campbell (The Rocketeer!) makes an unexpectedly fine Lincoln, and Jesse Johnson (son of Don) is actually quite good as John Wilkes Booth.  I don’t think we’ve had a definitive John Wilkes on film or TV yet, and this probably isn’t quite it, but it’s still damned good.  Disappointingly, most actors seem to see playing John Wilkes Booth as an opportunity to camp it up fantastically, playing it way over the top.  In reality, he was much more complex.  Yes, he did a terrible thing, and yes, he was a dramatic person, so some scenery chewing is probably necessary.  (And we definitely need him charming some pretty ladies, which this film doesn’t have time for.)  But you really need to capture the faintly ridiculous nature of John Wilkes as well—he would make these grand statements, but some people would giggle at them.  Yes, if he had a cape, he’d be swishing it about, but he wouldn’t be completely convincing doing so.  And finally, you need to be able to portray John Wilkes, for all his looks, for all his family fame, as a sort of pathetic figure.  He basically failed as an actor, he’s in way over his head, he doesn’t really know what he’s doing in attempting to take down the government, his lack of intellect frustrates him.  In the end, he’s hiding in the woods, sitting on the ground with a broken leg, begging for newspapers so he can read the reviews of his very last performance.  He’s waiting for the world to recognize him as a hero—a star—for people to come to his aid, spirit him away to somewhere safe and treat him like a king—and then he’s eventually realizing that this recognition will never come.  And at the very end, his last words are “Useless, useless” (a scene that this film captures very well).  That’s my vision of John Wilkes Booth. 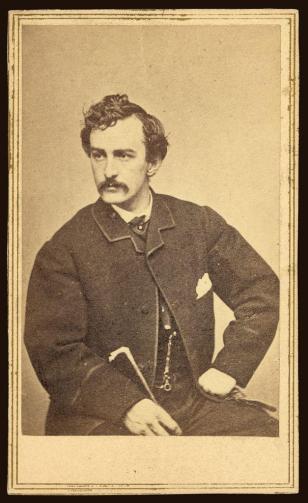 You know, strangely, this film actually says John Wilkes was becoming one of the greatest actors of his time.  I think My Thoughts Be Bloody (see end of post) pretty definitively proved that wasn’t true.  Besides that, though, this film was pretty accurate.  I just wish there had been more time—it’s too complex for 96 minutes, really.  It does a good job of compressing things, but this could certainly be a great miniseries.

And, so, yes, I think Jesse Johnson is a pretty great John Wilkes Booth, but I think there’s not enough time here to develop the complete, complex character of him that ideally it would have.  Maybe someday.

I like that it doesn’t stop at the assassination, as most Lincoln films seem to do.  The rest is too interesting to leave out.  And the end, with the photos of the conspirators being hanged, is brutal but effective.

I love the way they filmed Lewis Powell’s attack on the Seward household.  There’s a very visceral sense of terror as he goes rampaging through the house.  This attack is not the one clean shot of Lincoln, but a violent and gruesome attack on multiple people.  We see the fear in Frederick’s eyes as Powell pulls the trigger, and then, when the gun fails to discharge, we see Frederick’s face, beaten and bloody from being clattered quite brutally with the gun.  And it’s difficult to watch the attack on William Seward, Powell plunging the knife into him again and again.  But this is how it should be—this is what it was like.

Interestingly, they’ve made a definite choice not to show Lewis Powell’s face until the very end, when he’s getting his picture taken.  And that’s a bold and fascinating choice.  And I think it’s down to the extraordinary power of the photos of him as a prisoner.  They’re strikingly modern—more so than any other photos I’ve seen from that time period.  That gaze burns into you.

Anyway, it’s an artful choice from the director, and a great one.

I love how this film recognizes the power of details, and how they can illuminate history.  We learn about the stenographer taking down witness accounts of the assassination in shorthand, and how he lost his legs at Manassas.  We see the impossibly cute detail of the Lincolns holding hands at the theatre—and then, later, the 23-year-old surgeon holding Lincoln’s hand in his last hours, attempting to connect him to the earthly realm.

Also, I was pleased by the inclusion of Asia.  But they really should have made her look more like John.

Oh, and I’m not really sure why they chose to attach the “Killing Lincoln” title to this.  I guess the book was popular, but it’s known for having many factual errors, and also Bill O’Reilly is a completely abhorrent person.  It really saddens me that he’s gone into history writing (not that he’s actually writing them, I’m sure, but still)—it’s just laughable, but since people are actually reading this crap, it’s sad, too.  And he’s doing a “Killing” series—really?!  I correctly guessed that he wouldn’t write the apparently not-sexy-enough “Killing Garfield” and “Killing McKinley,” but I didn’t see “Killing Jesus” coming.  The whole thing seems rather gruesome and fairly tasteless.  And it’s obvious that O’Reilly is no historian, but the jumping to three wildly different eras rather than developing a specialty and studying it in-depth really reinforces that.

If you’re interested in this topic, there are two great books I can recommend—and unlike some books (*cough* Manhunt *cough*), these two have extensive endnotes and place a premium on accuracy:

I’m still hoping, by the way, that someone will create my dream project of making a miniseries about the Booth family.  They’re too interesting not to.  It would fit perfectly on HBO or one of those.  Please someone do this.

And finally.  I can’t write something about Lincoln’s assassination without including this:

This site uses Akismet to reduce spam. Learn how your comment data is processed.